We have posted a lot of silence here since last spring, but that doesn’t mean we’ve been quiet. We’ve actually been quite busy, and a *lot* has happened in that time. We realize we’ve been negligent in terms of updating — here, finally, is an update to fill you in on everything! First, we extend our huge thanks and gratitude to everyone who supported our Kickstarter campaign! The funds raised will be very visible in the finished book, for they made the photographs and illustrations possible!

We are excited to say that The German-Jewish Cookbook: Recipes and History of a Cuisine is on schedule for a publication date in September, 2017,  a mere seven months away! When we know the exact date, we’ll certainly announce it here.

A test batch of fried Knee Doughnuts, so named because they are shaped over one’s knees! Photo by Gaby

To backtrack, we spent the summer finishing the book. In June, we were lucky enough to be invited to stay at the house of friends in Vermont where we had a 10-day work retreat. We spent the time working very long days, recipe testing and writing, albeit in very beautiful, green surroundings.

In late July/early August, we did the photo shoot for the book, shooting all the colour photographs of prepared dishes. There were three, sometimes four, of us crammed into the not-tiny-but-also-not-large kitchen at my parents’ (Gaby and Don) house. We wound up doing almost all of the photography in there, as well as all the cooking. We were literally shooting photos right next to the stove most of the time, which is where the window with the best light happens to be situated. Fortunately, we all soldiered through with good humor, and we all emerged unscathed, with no one having backed into a hot oven or some such calamity. I was the photographer, Gaby assisted with everything, Don washed many a dish*, and the final member of our team was the uber talented food stylist Catrine Kelty, who worked her beautiful magic on our food. She also happens to be amazingly fun and a joy to work with! 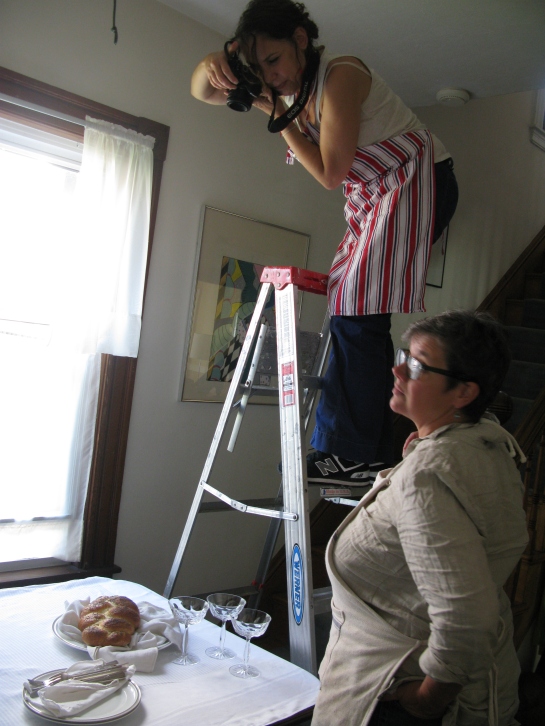 One of the few shots not done in the kitchen. Sonya on ladder with Catrine. Photo by Melanie McLaughlin

Gaby and I cooked all the food, with Catrine and Don assisting along the way. It was a veritable marathon of round-the-clock cooking at all hours of the day (before, during, and after the shoot day), and sometimes into the wee hours of the night. It was an exhilarating, exhausting, challenging, and very fun experience. And, we did get to eat – there was a ton of leftover food each day that we did our best to get through.

Eating leftover food for lunch inside, on a rainy day during the shoot.

Lunch out on the deck on a sunny day. So.much.food. #coffee Photo by Melanie McLaughlin

For the remainder of the summer, we toiled over the manuscript, getting it into finished form in order to submit it to our editor at University Press of New England/Brandeis University Press by our deadline in September. In late December we got the manuscript back from the copy editor and finished the editing phase, with a few more revisions back and forth. The book is now winding its way through the production process. 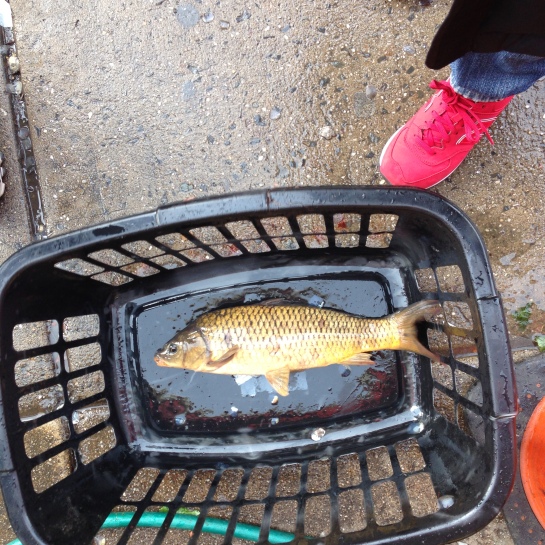 Buying a live carp at a Polish fish store in Greenpoint, Brooklyn at Christmas. I brought it to Boston (packed in a LOT of ice) to test a recipe.

In the meantime, while all of the above was happening, Megan Piontkowski was working on her wonderful hand-drawn illustrations which will be seen throughout the book, in addition to the photos. We had lots of discussion with Megan thoughout the process of working with her about various foods and dishes, and what they should look like. A shout out to Megan for her fortitude in forging ahead with illustrations of some very meaty dishes, despite the fact that she is a vegetarian.

We thank everyone for your interest in our book and in the many comments you’ve left here. Apologies if it’s taken us a while to get back to you.

More soon! We’ll be back here in this space sooner rather than later.

*My parents’ dishwasher went kaput on the first day of the shoot. Fun times.