What a pleasure to think back to that balmy autumn day on Long Island, while we shovel out of our two feet of snow here in Boston. This is a perfect time, when pretty much everything has closed down in the public world, to sit down and write up the cabbage segment of the two-part cooking demonstration we held at Golden Earthworm Organic Farm’s CSA Harvest Festival last October. You can read about the first part, preparing Kohlrabi in Roux (with a recipe included), here.

We chose to make our Cabbage Slaw, a dish prepared during my childhood by my grandmother. I always loved it at the festive meals where it accompanied things like roasted duck. But we realized that it could easily be a stand-alone dish that people would enjoy snacking on during the farm’s afternoon event. 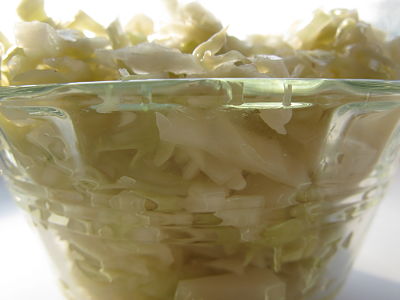 This dish is neither a typical cole slaw (it does not contain mayonnaise), nor sauerkraut (it is not fermented), though it bears similarities to both. The characteristic feature of this recipe is that the cabbage, after having been shredded as finely as possible, is covered by boiling salted water and allowed to steep for at least one hour, causing it to wilt while maintaining much of its crunchiness. During the demo at the farm we poured off the water after a half-hour (simply because we were short on time) and had good results, though the extra soaking time certainly results in the cabbage having a more subdued – and pleasing – texture. After dressing the cabbage in a vinaigrette, it was ready to go – and go it did!!  Children and adults alike came back for seconds (and thirds!). We realized we aren’t alone in our penchant for this zesty slaw. Actually, it would be a great dish in this snowy weather. I think I will go make some now to eat along with the lamb shank that’s roasting in the oven. 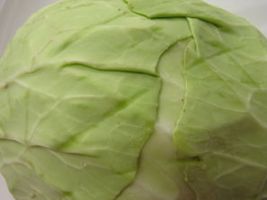 Cabbage Slaw (Krautsalat) serves 6-8 as a side dish

Although the original recipe for Krautsalat in my grandmother Emma’s handwritten cookbook included onion, she did not use them when she made it. Hers was a very mild salad that successfully accompanies any roasted meat, or even a myriad of vegetarian meals. Since I never made note of what she actually did, I have reproduced the taste and texture of her version based upon my childhood memories to create this recipe. This unique dish is surprisingly addictive – the cabbage, which is halfway between cooked and raw, retains a satisfying crunch that is made refreshing by the acidity of the dressing.

The cabbage is best if shredded quite fine into a large bowl. We use a mandolin – (pictured above, left, is my grandmother’s wooden mandolin that she brought Germany that I still use today) but you can also use a box grater on the long bladed side, or a food processor using the slicer attachment. -by Gabrielle

1 quart of water with 2 heaping teaspoons of salt

salt and white pepper, to taste

1) Boil the water with the salt.

2) Prepare the cabbage: Shred the cabbage into a large heat-proof bowl.

3) Pour the boiling salted water over the shredded cabbage. Let it sit until the water cools, about an hour.

4) Pour off as much of the water as you can by pressing down with a plate that is slightly smaller than the diameter of the bowl, holding down the plate and inverting the bowl in the sink until all the water has poured off.

4) Make the dressing: Combine the oil, vinegar, salt and pepper in a small bowl and whisk. Pour this over the cabbage and toss.

5) The slaw will be ready to eat immediately, though the taste and texture will mellow and blend if allowed to stand for an hour or more. 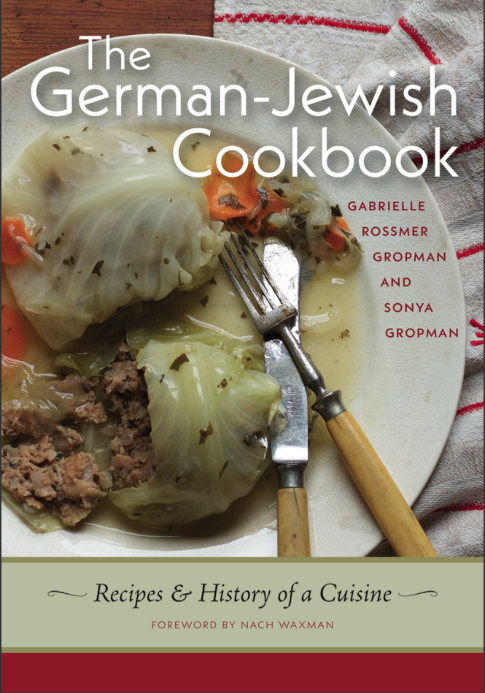